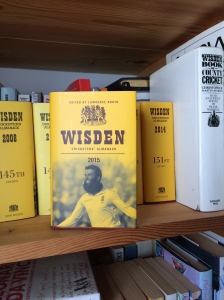 Wisden 2015 – a welcome addition to the shelf

I remember reading a review of a previous edition of the Great Yellow Book that compared reading it to the eating of a Cadbury’s Cream Egg (the line of thought was something like the strapline – ‘How Do You Eat Yours?’ if memory serves…)

Well, I ingest mine in a gluttonous, inelegant fashion, diving headlong into the annually weightier tome with the certain knowledge that if Wisden is here, then Summer is here and I can go back to dreaming about cut shots and hook shots and pull shots that I do not have the talent to actually play when the season proper actually begins.

If the Great Yellow Book is to cricket fans what the Little Red Book was to Maoists, then this latest edition sees editor Lawrence Booth taking no prisoners and hitting the ECB hard for their bungled handling of the sport over the last 12 months.

Indeed – if you’ll allow me to labour a simile – it was Mao who said, “Members of the Party committee maintain only formal, not real, unity among themselves. This situation must be changed,” and that’s not far from Booth’s sentiments in his Editor’s notes, which maintain that, “It was nexus of self-preservation – yet, as the wagons circled, the wheels kept threatening to come off.” Ouch; harsh, but fair.

This is, apparently, not a sentiment shared by the ECB themselves; as evidenced by the reports of out-going Chairman Giles Clarke’s confrontation with Booth at the launch dinner of the almanack.

As on so many topics, I disagree with Clarke and am very happy with the 2015 incarnation. Booth’s notes are strident – but accurate to a large percentage of observers. But to read Wisden is never to endure a one-note innings; there is always timbre. Here we have Gideon Haigh’s affection ode to nicknames in the game, Ed Cowan on the mindset of opening batsmen and the ever-readable Simon Barnes on the increasingly rare joy of the genuine “bunny” no.11 batsman and Michael Clarke’s emotional farewell to Philip Hughes.

These joys are supplemented by the, long overdue, inclusion of a section dedicated to Women’s cricket as well as an expanded obituaries which takes in some of the people omitted for various reasons in the past (and I’m surely not the only person reduced to hoping for a call up due to illness/injury of a player while watching a first class match as my final hope of being included in this section in the future?)

Quite simply, Wisden is the go-to place for a collection of the finest writers, writing about a sport with an (arguably) greater literary tradition than any other. So alongside Booth, there is Simon Hughes on he-that-shall-not-be-named, Michael Atherton, Rob Smyth, Stephen Chalke, Jarrod Kimber, the ever-green Marcus Berkmann and the first fiction entry in the annual Wisden Writing Competition by a writer I’d not encountered before, Peter Casterton.

The final joy is the Chronicle of 2014 where you can read about the Pakistani Taliban’s refusal of a good will match against the government and the use of Cannabis growing lamps, confiscated by West Midlands Police, to aid the growth of Warwickshire’s (legal) grass alongside many other vignettes of the charming, and slightly dotty, world of cricket.

If you’ve not invested before, you’ll not be disappointed. This edition makes a fine addition to any cricket lover’s shelf.