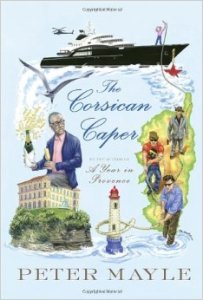 The Corsican Caper In the UK, Peter Mayle is still best known for his non-fiction account of life in France, A Year in Provence. Nearly 30 years old, the book recounted Mayle and his wife’s move to a broken down house in the countryside and his struggles to work with the builders and locals.

In terms of epoch-defining work, this was definitely an under-the-radar success but the result was an glut of Brits shelving the rat race and heading to the sun at the earliest opportunity. The book also created an entire new genre of works by a range of authors with similar stories to tell. Some are excellent – Chris Stewart and Driving Over Lemons – some are rot.

But, what people are perhaps less aware of, is Mayle’s latter career as a novelist. He has been turning out a range of work – both fiction and non-fiction – since his big successes of the early 90s and the novels are of an infinite lightness and charm.

I’m never really comfortable with work being described in the ‘guilty pleasure’ category. Either you like the work or you don’t and Mayle, I’m sure, pours all his efforts into producing the work. They have a formula – charming, handsome English male with enough money to do what he pleases gets sucked into solving crime in the south of France, whilst dalliancing with a beautiful local girl and stopping for lashings of Provencal cuisine and gallons of rose wine.

So far, so parfait. However, over the last few novels, there appears to have been an evolution in the formula. The lead characters are now American and there is definitely a move to try and tap into a wider international market.

The Corsican Caper is the third in a series – preceded by The Vintage Caper and The Marsaille Caper and the first time Mayle has tackled a series of fiction titles – and is centred around the character of Sam Levitt, a former criminal turned adventurer for hire, who has, over the course of the books, been involved in wine heists, kidnapping and art theft. The gorgeous Elena Morales and his billionaire chum Francis Reboul, owner of a sumptuous Gatsby-esque mansion overlooking the Mediterranean near Marsaille, join Sam in his quest for a profitable life.

This latest novel actually centres around the house itself, when an unscrupulous Russian business man – Oleg Vronsky – who, when not indulging in standard Russian oligarch behaviour as prescribed by Mayle, such as purchasing a football club, tries to acquire the luxurious property by a series of increasingly desperate methods. This, inevitably, involves kidnapping, assassination attempts, the Corsican mafia and Sam saving the day. And lunch. Lots of lunches.

The charm of the novels is in the descriptions of the food and the wine. I’m guessing that Peter Mayle has had to dredge out his old thesaurus across the span of his writing for new ways of describing rose wine – but that’s OK because I like the vicarious experience of eating and drinking in sunny climes, especially when I’m stuck in a wintry Highlands.

The Corsican Caper is not high art. It’s not going to lecture you on the human condition or tell you anything about human nature which had slipped your attention previously. But, the novel nips along, the plot twists and turns without apparent effort on Mayle’s part and the man can write about wealthy people, enjoying the good life, like few others.

I can only offer a wholehearted recommendation for this as a first class beach book.

The Corsican Caper in Five Words: Crime and Wine in paradise