Is it really 23 years since first we  met? Who could not love Commisario Guido Brunetti and his loveable collection of family and colleagues?

Venice – it is traditional at this point to say that the city is as much a character in the novels as the humans,  – the city Brunetti navigates with as much detached san froid as he can muster as the murky world of Italian police work intrudes on his homelife. 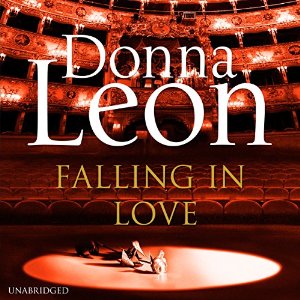 There are many theories as to why people read crime fiction – catharsis born of frustration at their own lives, vicarious wish-fulfillment to name but two – but there’s no doubt that Donna Leon’s characters buck the trend of the standard tropes found in the genre.

So much so, that to define the character of Brunetti, it may be easier to say what he is not.

Brunetti is not divorced. Married to a wonderful professor of literature, Paola. She may have been born into the Venetian nobility, but this rebellious left wing academic with a burning – necessarily unrequited – love of Henry James is mother to his children and always on hand to tease him, gently chide or act as a moral arbiter for Guido if he begins to stray too far from the path of righteousness. Paola can cause him problems, such as when, in fury at the authority’s lack of power to counter a sex tourism travel agency, she was driven to smashing the firm’s window with a brick, but she is almost always on hand to provide a sumptuous home cooked lunch or dinner.

Brunetti is not an alcoholic. Although, he is partial to a little tipple on his terrace at the end of a long day. Or lunch time. Or whenever the Veneziano weather will allow.

Brunetti is not fetishistic about the law.  As a Commisario of the Italian police, Brunetti is most often found examining his cases in terms of real politik – can something be done? If so, at what cost? And, how many favours will it cost a good man? If the answer to any of these is too much; then he may well let things slide. But never too far – after all, he still has to face Paola at the end of the day.

Brunetti is not estranged from his family. He has too children, Raffi and Chiara. They have not aged a great deal over the preceding near-quarter of a century, Raffi is a perpetual teen at university and still coming home to Mama, whilst Chiara has inherited his mother’s social conscience, but both children will still do the washing up after a family meal – even with a little grumbling.

Brunetti is not a lone wolf, or vigilante against the world. Guido relies heavily on a support network of colleagues, most notably his sergeant (later Ispettore) and friend Vianello, who plays Horatio to his Hamlet.

His greatest asset in his work – at least in terms of getting results – is the mysterious Signorina Elettra. His boss Vice-Questore Patta’s secretary, well connected and with a varied dating history, she spends the finances of the Questura on flowers to brighten her day and spends the rest of the time frightening Patta with her intelligence and Brunetti with her ability to circumnavigate the computer systems of the Italian state. Oh and the law, but she never seems to worry too much about that. 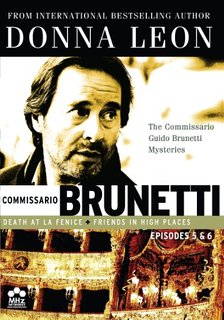 Some of the Brunetti books were adapted fro German television, apparently to Leon’s displeasure.

On the other hand, Brunetti is in conflict with his boss. One trope of the genre Guido does fit is his dislike of his boss. Vice-Questore Patta is vain, lazy and southern. Not a great combination in Brunetti’s opinion. He is joined by his subordinate brought along from Naples in the unlovely form of Lieutenant Scarpa who, over the course of the novels, has done nothing but snarl and act as a counter-weight to Brunetti and Vianello’s innate goodness.

Across a series this long, there is some variation in quality, for sure. The earliest novel, Death La Fenice was a promising start, but the series really hit its stride with a run that took Brunetti from a military academy in Uniform Justice to the famous glass works on Murano in Through a Glass Darkly.

Latterly, the novels feel like they have fallen into a comfy rhythm that pleases rather than pulsates on the reader’s palate. The latest novel, Falling in Love, is the 24th in the series and brings us back full circle to the opening opera-themed novel. And it’s fine. Not the best, not the worst.

But, if you’ve never had the pleasure of meeting the Brunettis, dip in. You’ll not be sorry.

Falling in Love is available from Amazon.co.uk

The man just seems to be getting better and better.

Twitter star @Beathhigh, also known as writer Ian Rankin, has been entertaining fans of his Inspector John Rebus novels since the debut of the hard drinking, ex-squaddie in 1987’s Knots and Crosses. Rebus has changed over the years – his musical taste, his sense of humour, his relationships with friends and family – but with this, the 20th novel to deal with the Edinburgh underworld, Rankin may have outdone himself again.

Famously, Rebus was written in tight chronology, aging in real time. This gave Rankin a problem as Rebus was forced to retire in 2007’s Exit Music but Rebus was saved and was able to be brought out of retirement in the darkly brooding 2012 Standing in Another Man’s Grave due to the advent of (the then-Lothian and Borders) cold case units.

I first entered the dark underbelly of this particular crime series through an abridged audiobook of Knots and Crosses (on cassette – I’m old) read by James MacPherson in his pacifying, undulating Scottish lilt, somewhere around the year 2000. By the time Rankin published The Naming of the Dead in 2006, I was hooked and hugely impressed with the author’s ability to meld a gripping narrative with real life events in faction-style rarely so successfully achieved in the orbit of tartan noir.

However, whilst I think this was the time that Rebus as a character really got his hooks into the reading public’s imagination, I actually believe the post-retirement novels have been even more satisfying, even if the contemporary references are now broad brush strokes designed to add colour rather than driving plot in the quite the way of old.

Even Dogs in the Wild is a novel of big themes – death and love (of course) – but also of families and relationships; parents and children, friends and enemies. Exemplifying these themes are the characters who pump the heart of Rankin’s tale.

Rebus and Big Ger Cafferty have mellowed from the ying and yang of Edinburgh’s mean streets to a pair of bickering pensioners with more fight left in them than outsiders expect – the Still Game Jack and Victor of organised crime and detection, if you will.

Rebus trying to improve his relationship with his daughter Sammy at the prompting of Malcolm Fox, as Fox’s own father ails and his sister thrashes about in hurt and confusion.

It is the arcs of the characters which are so satisfying. Rankin has also moved Malcolm Fox from the uptight sober (literally and metaphorically) semi-policeman of The Complaints to a touching foil for Rebus and Siobhan, almost becoming natural police (as McNulty would say) and dancing around a relationship with DI Clarke which is supportive, if not brimming with passion.

Rebus, Clarke and Fox are becoming The Good , The Bad and The Ugly (although which is which is anyone’s guess) of these tales but the passing of batons and dying of immature lights are echoed on the other side of the street by Cafferty’s dealings with too-cool-by-half upstart Daryl Christie making his third appearance.

Finally, I listen to these novels using the (thankfully unabridged) Audible downloads – no more cassettes. James Macpherson is still doing a grand job and has the tonal shifts to represent all of the characters with realism and subtlety.

I don’t know if it’s because we’ve been with the characters for so long, or because to read characters we know so well and to see them change and adjust to new realities, but Rankin is better than ever. I just hope that a) no one tries to do another terrible adaptation of these and b) that they are still wheeling Rebus out in his bath chair for Rebus 40.