It started with the Care Bears, (said nobody ever.)

But, for me, it really did start with Care Bears: The Movie. I was 4 and this was 1985 and my parents took me, along with some friends from play school, to the local cinema for the first time. 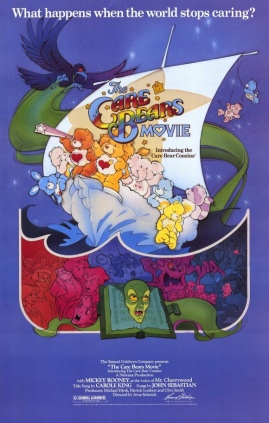 I remember nothing. One of the friends may have been celebrating a birthday. She may have had a sister. I’m guessing that may explain the choice of movie.

Subsequently, I’ve done some research. Cinematic golden age problem child Mickey Rooney was in it. The writer, Peter Sauder, had written on such top notch fare as Inspector Gadget, Star Wars: Droids (that’s the cartoon which Disney are still trying to resolve the issue of its place in the cannon 30 years later) and went on to the glories of Barbar, Rupert and the Beetlejuice cartoon.

But I knew none of this. What I remember is my mum tapping me on the shoulder – was it a minute? An hour? A day into the movie? I had no idea. I had disappeared. She learnt across and said, “Were you in the film?”

Total immersion is tough to describe. Bognor Regis’ Picturedrome dates back to the 1880s and, these days, appears to have been rejuvenated. In the 80s, when the average cost of a cinema ticket I’m reliably informed was a whole £1.70 for an adult, it was known unaffectionately as the “flea pit”. Salubrious it was not. I loved it.

My next love was TV and Granada classic, The Professionals. I mean, due to a speech impediment, I couldn’t actually say that. So, in fact, my next love was The Procesionals, much to my parents’ delight and amusement but for me there was nothing like two U.K. Starsky and Hutch rip offs sliding across the bonnet of a pair of Ford Capris under the disapproving eye of that bloke from Upstairs Downstairs to excite my pre-school heart.

The addiction grew. But the world was very different then, even though it’s not that long ago* (*It may, in fact, now be quite a long time ago). My parents couldn’t afford a video recorder so we didn’t get one till at least 1989.

By the time I went way to boarding school in the early 90s, I was sat in the phone booth whilst my poor father had to go to the shop on a Thursday to get both the Radio Times (BBC1&2) and the TV Times (ITV/Channel 4) and then my mother had to spend her telephone bill reading out to me which movies were on that week so she knew which ones to VHS for me to watch when I got home at the end of term. No parents are perfect, but the fact they didn’t excommunicate me or leave at boarding school does speak very highly of this particular pairs’ good humour and tolerance.

I watched Barry Norman and Film Insert-Whichever-Year-Here like other people went to church. I was easy to buy for at Christmas – the latest Halliwells Film Guide would keep me occupied for hours. In fact, I’d read them so thoroughly that kids used to test me by asking me to the name the year, main actors and synopsis of any film in the book. I usually did ok too.

Last week, I began work on a script with a guy I’ve known forever and who is a successful film maker of many years’ standing. He’s thrown me an invite because he’s very kind and because… I don’t know, he took pity on me? Who knows. All I know is ill forever be grateful for the opportunity.

I hope the script gets finished.

I hope we can get it made.

But mainly, I hope that it has the power and emotional resonance of Care Bears: The Movie.

One thought on “A Film Education”

Apparently I cut Honeysuckle’s face in half. My apologies.
Fire pit, a Highland evening as the sun goes down at 10pm and @mrs_machin trying out her new smoker. I’ve had worse times...
Wanted to buy @Mrs_Machin a little present so, thanks to @beckorio
As well as the exclusive Q&A with author @neil_lancaster_crime you can find a review of’Dead Man’s Grave’ on the #blog - Link in bio @hqstories @robbieguillory #bookstagram #bookreview #bookblogger
Proud to be featuring an exclusive #publicationday Q&A with @neil_lancaster_crime on the #blog today, discussing his exceptional latest novel, ‘Dead Man’s Grave’ @hqstories #bookstagram #bookblogger #bookreview
#tbt #elvas a couple of years ago. #alentejoportugal has my heart and I will be back when I can ❤️ @visitalentejo_br